For more than a decade Rocky Mountain Wild and a coalition of other conservation organizations have been fighting to stop the development of the “Village at Wolf Creek.”  This proposed development would build roads, homes, condos, retail stores, and energy infrastructure to support 8,000 people at the top of Wolf Creek Pass.   The “village” would bisect an important wildlife movement corridor connecting the Weminuche and San Juan Wilderness areas, and disrupt critical daily and seasonal movement patterns for lynx, black bear, elk, and other species.

Several years ago, this area was hit by a spruce beetle epidemic which killed 60-70% of the spruce trees.  Since that time many people have posed the question, “Why would anyone want to build a development among all those dead trees?”  We don’t really know the answer to that question, but, we do know that plans for the development continue to progress.

On Saturday, August 22 Rocky Mountain Wild lead a bioblitz at Wolf Creek Pass to survey and record the biodiversity of this landscape, and to find out what is really happening among “all those dead trees.”  Twenty-eight dedicated volunteers gathered near the top of Wolf Creek Pass at 6:30 AM with their smart phones, cameras, and field guides in hand. The group included members from the San Juan Citizen’s Alliance, Pagosa Great Old Broads for Wilderness, San Luis Valley Ecosystem Council, Weminuche Audubon Society, Colorado Native Plant Society, Chama Peak Land Alliance and Rocky Mountain Wild.  There were ornithologists, botanists, biologists, as well as general environmental enthusiasts eager to learn from the experts in the field. 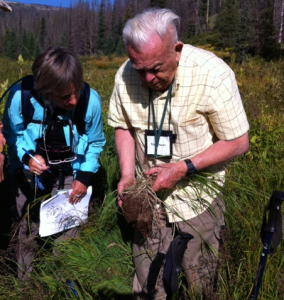 Though results are still being compiled and tallied, this group cataloged an impressive array of species in just a few hours including:

All of these species were found in the area adjacent to and downhill from the proposed “village” development, and will likely be impacted by the construction, noise, light, water run-off, and habitat fragmentation from this small city.  Unfortunately, the Environmental Impact Statement prepared by the Forest Service on this issue fails to fully address these impacts, and virtually green lights this controversial development.  This area is important habitat for wildlife, and should be protected.

You can learn more about this issue on our Friends of Wolf Creek website at www.friendsofwolfcreek.org.  You can also join the 79,000 people who have signed our petition to the Chief of the U.S. Forest Service at http://bit.ly/NoPillage.

Together we can save Wolf Creek Pass – because it is so much more than just dead trees.  It is habitat for abundant and diverse flora and fauna, and should be protected so future generations can have a chance to visit this unique place and glimpse a rare Canada lynx, watch bear cubs play, walk through fields of wildflowers and listen to a chorus of bird song.

The Wolf Creek BioBlitz was co-sponsored by San Luis Valley Ecosystem Council, San Juan Citizen’s Alliance, and Pagosa Great Old Broads for Wilderness.  We are very grateful to Nature’s Oasis of Durango and Durango Natural Foods for donating delicious food for our volunteers to enjoy during the bioblitz.