Clearly there was an instance that motivated this statement. It was a Friday evening in the Indian Peaks. A few of us dads decided to take our kids out camping. My friend who I’ll call “Shooks” and I were looking for dispersed camping on Forest Service land. It was getting late and we had to settle for a trash strewn site. Scott arrived later that evening and was not pleased. Had he seen the site before we filled two trash bags with everything from dirty diapers to soggy blankets, I’m sure he would have left. Then the campers nearby started shooting guns and playing techno music. This was not a good site.

My wife Jen reassured me that I have picked some very good camp sites. Although she also reminded me of where we camped at a hotsprings in Oregon years ago. The tent was so sloped we were afraid we were going to roll down the hill. In my defense, we got there in the dark and were in a rush to get into the springs. But again, not a great site.

So when were started heading farther north into Bears Ears I was a bit nervous. I spent hours staring at maps and searching the internet. Upon driving into this vast area I still had not picked a location. Scott’s words were echoing in my head.

We pulled into Comb Wash and I felt we could do better. We continued west. I found a random numbered road on the map and decided to turn. I had no idea where we were going. Jen looked concerned. I pointed at a possible site and Jen said, “Matt, it looks like hell.”

We pushed on – and there it was.

We turned into a site next to a dry creek bed, surrounded by interesting rock outcroppings and old growth ponderosa pine.

It was flat and boasted a fire pit that would have made the Vikings proud. 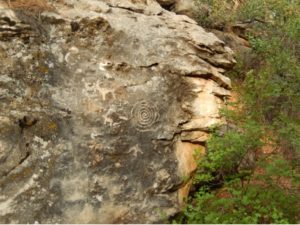 I looked at Jen and said, “take that Scott.” Had Scott not thrown out that challenge, we may have settled for a lesser site. Although after one day of exploring this vast natural and cultural area, I feel that with a little searching around you’d be hard pressed to find a bad site.

2 thoughts on “The SabbMattical Chronicles – Volume 5”