And around we go…

“Since it costs a lot to win, and even more to lose, You and me bound to spend some time wond’rin’ what to choose.”Robert Hunter

I could have spent months exploring the canyons and forests of southern Utah. But, when you’re traveling with an almost 3 and 6 year old, knowing when to say when is a necessity. It was time for us to start circling back home. As I contemplated a route back through Colorado, I felt that getting to some water, preferably some we could swim in, would be nice. I knew that Jen would love a stop through Ouray, and keeping your wife happy is also a smart choice. 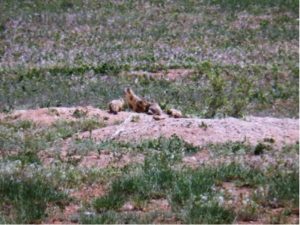 It just so happened that our drive up route 141 would have us passing near some oil and gas lease parcels we have been working to protect. These parcels are directly adjacent to occupied Gunnison sage-grouse habitat.[1] The Gunnison sage-grouse is an Endangered Species Act listed species and accessing these parcels will increase traffic through designated critical habitat. So we took a quick detour through some sagebrush habitat. The kids were excited about the possibility of seeing a sage-grouse. That did not happen. Although we did see some White-tailed prairie dogs!

I got to see the parcels we are working to protect. In all the years I have been advocating to keep oil and gas development out of more sensitive areas, this was the first time I had stepped foot on a parcel that could be developed.

Looking around and imagining what this area would look like with well pads, new roads, pipelines, compressors, and other infrastructure was impactful.

Although we live at a time when we still rely on oil and gas, we don’t need to be developing in areas that will inappropriately impact species and other natural values; which we need even more.

When we finally arrived in Ouray it was evening and the kids were hungry. I decided to drop the family off in town and go get a camp site. I headed up the hill to the Amphitheater campground. I hoped that on a Monday evening there would be available sites – I was wrong. So I headed back down the hill and to the KOA on the other side of town. I had never stayed in a KOA and vaguely knew what to expect. I asked for a site away from people and the lady put us in site 51. I drove around to our site and immediately noticed the Texas license plate in the site next to ours. I am originally from New York and recognize I hold an innate prejudice towards our fellow countrymen from the Lone Star State. The Bush years didn’t help. Needless to say, I was unsure about what this KOA experience had in store.

After dropping a few things in the site, I drove back into town to get the family. When we arrived back at the KOA, Leo said he didn’t like this place because there were too many people. Jen looked at me, knowing that Leo’s comments echoed my thoughts. But we would not be spending much time at the site and would make the best of it.

As we began to set up camp, we struck up a conversation with our Texan neighbors. Soon our kids were all playing together. That evening I found myself sharing a campfire with our new friends, listening to country music, drinking beers, and getting to know each other. J.D. is a train engineer. He is almost always on call and regularly away from his family for days hauling freight. This was his family’s big vacation for the year and they had been traveling through Utah visiting the National Parks. We shared a belief that it is important for our kids to experience and value the natural beauty of these amazing places.

The next morning when we were getting ready to go to the hot springs, Leo said he didn’t want to go; he wanted to stay at the camp site and play with his new friends – Wyatt, Bryce, and Josie. I guess he also realized camping near people can be fun. I had to accept the error of my initial reaction to our Texan neighbors. We were similar in many ways. That night, J.D. told a story by the campfire. He had heard it from a co-worker. It went like this:

A little bird was flying south for the winter. It was so cold the bird froze and fell to the ground into a large field.

While he was lying there, a cow came by and dropped some dung on him.
As the frozen bird lay there in the pile of cow dung, he began to realize he wasn’t as cold.

The dung was warming him up!
He lay there all warm and happy, and soon began to sing.

A passing cat heard the bird singing and came to investigate. Following the sound, the cat discovered the bird under the pile of cow dung, and promptly dug him out and ate him.

This story was impactful. We so often villainize those we disagree with. It’s sometimes easier to lump people into groups – enemy or friend. But often times if we take the time to get to know that person, their history, their life, their struggles; we find there is often common ground.

When we parted ways the next morning we exchanged contact information and talked about the possibility of crossing paths on future family camping trips. J.D. invited us to meet them down at Big Bend National Park in January. If a New Yorker and a Texan can become friends, laugh around a campfire, have kids who play together, and value the natural surroundings; maybe there is hope for our country?

As I finish writing this last Volume of the SabbMattical Chronicles (for now), the news came out that Secretary of the Interior, Ryan Zinke, has recommended shrinking the borders of Bears Ears National Monument. I’m assuming that Trump will follow this recommendation. Another news story focused on the local Tribes “gear[ing] up for a major legal battle with Trump” challenging this potential decision. I’m sure conservation groups will also get involved and again it will be up to the Courts to decide the fate of this special area. And around we go…

Although this sabbatical has not necessarily been restful, I do feel a rejuvenated sense of passion for the work of Rocky Mountain Wild. Visiting these awe inspiring places has been impactful. Sharing our adventures and my thoughts through these Chronicles added to the experience. As I sit at my desk, amongst the piles and obligations; I am thankful for having the time away, for the many people working to protect our natural environment, and for those who worked to protect these places for my generation and hopefully the generations to come.

[1] When I first started working for Rocky Mountain Wild, which was then known as Center for Native Ecosystems, our Biologists quickly corrected a grammatical error I was making. It turns out that you only capitalize animals’ names if the name has a word that would normally be capitalized, like Gunnison sage-grouse or Canada lynx. However, if this is not the case, than the name is not capitalized, like white-tailed prairie dog or moose. This has always rubbed me the wrong way. Why would I capitalize a person’s name, but not the name of an animal species? Just sayin’…