The desert of Southern Utah. A landscape crafted by millions of years of wind and water. A place inhabited by wildlife, plants, and ancient civilizations that had to adapt to this harsh climate. Evidence is found through rare species, unique characteristics necessary to survive, and markings on the cliffs.

We arrived at Valley of the Gods, which is the southern region of the recently designated Bears Ears National Monument. I receive almost daily emails from organizations seeking continued protection for this landscape in the face of the Trump Administration’s threats of stripping this area of National Monument status. It felt like an important place to visit and document what could be lost. 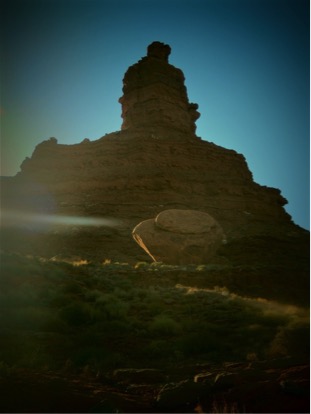 The towering sandstone features loomed overhead. The vastness and grandeur of the landscape was awe inspiring. We found a campsite and set up. I took my children for a hike over the hill behind our camp. We walked through dry washes and over red clay hills, taking in different geological features and the many species of plants.

We came upon a beautiful blue flowering plant that I imagined to be a Penstemon of some kind. I commented that we should return to this plant with the camera so that I can figure out its name. In my fairly narrow knowledge of rare plants, I believe this to be one.

Upon returning to camp, little biting bugs had emerged. They were annoying. As a child of the North-East, I grew up with the ever present nuisance of mosquitos, black flies, and an array of other biting bugs. Living in Colorado has spoiled us with a relatively bugless environment. I noticed myself and my family getting frustrated at the incessant swatting. Leo commented that he did not like the bugs. I pointed out that they were here first. He then acknowledged that “we were in their home.” After that, the biting and itching became a reminder that we are part of nature. The bugs needed us to survive (either to eat or reproduce) and I imagine the desert birds feasting on the bugs. We are not outside of this chain. As much as we can lock ourselves in our homes, keep out of the natural world, turn a blind eye to how we get our food, and ignore the impacts of our lifestyles; getting stung by a tiny bug was a good reminder that we are not separate. We depend on all of nature, and in situations like this – it depends on us.

The next day, we took another walk through the desert. We came upon a baby chipmunk squeaking under a low desert shrub.

The boys thought it was cute and wondered if we should help it. I told them that we should leave it so that its mother could return to care for it. In the back of my mind I wondered if its mother had been eaten by the foxes we saw earlier in the day or one of the raptors circling overhead.

If that was the case, this baby chipmunk would also end up a meal.

As we continued our walk, Leo asked why there was not a cactus in this desert. We hadn’t seen many and I didn’t know why. About 10 minutes later, he found one.

Was this one of the rare “hookless” cactus that I had commented about numerous times in an attempt to divert oil and gas development from sensitive plant habitat? Unlike species like grouse, lynx, bear, or moose; I’ve realized plants are different. Walking through this desert environment gave me an appreciation for the vast array of different plant species that would take many lifetimes to see and recognize. Was this cactus rare? I may never know. After years of working to protect rare plants, I’m become aware of how little I really know about them. I’m suddenly very appreciative of our biologists.

Before leaving the Valley of the Gods, I wandered back behind our camp to take a picture of the beautiful blue flower I believed to be a Penstemon of some type. I searched the washes and hills for around 30 minutes – unable to find the plant. I criss-crossed the landscape frantically searching; but had no luck. I guess this is the nature of searching for rare plants.

Should this area lose its National Monument status, a road in the wrong place could wipe out a rare plant species. Oil and gas development could alter the pristine views. Residential development could turn it into the next retirement community. What has been protected and cherished for thousands of years could be lost to future generations. The delicate balance formed over millions of years could be destroyed. As we head north to explore more of what is currently Bears Ears National Monument, I can’t help but wonder what its future holds. I fear for this landscape…

One thought on “The SabbMattical Chronicles – Volume 3”